"DNR" propagandists are outraged by the Vyshyvanka Day, held in Mariupol (PHOTO)

Mariupol’s vyshyvanka parade on May 17 once again outraged the "DNR" - the occupation media broke out with versions that only "imported" citizens could participate in such an event.

"Visitors from Ukraine held a "vyshyvanka parade" in Mariupol” - under such headlines local propagandists published information about the Mariupol residents’ procession along the central streets in national costumes and with Ukrainian flags.

"A lot of visitors from Lviv, Kyiv and other cities, as well as local pro-Ukrainian activists, became an extras for a city parade", - the “DNR” media assured.

"The large industrial center was turned into a backward Carpathian village. It is not something to be proud of", - the media quotes an alleged citizen of Mariupol. At the same time, the propagandists themselves recognized that "most of the participants spoke Russian".

In turn, participants of the Vyshyvanka parade assure that since 2014, Russian propaganda uses the myth that on a certain day Mariupol is allegedly crowded by visitors. "Yet again?? Last year they wrote this too :)”, "They say so every year))))))", "They spoke of visitors in 2014, it is not relevant now, because they became locals already))", - Mariupol residents write in social networks.

At the same time, it is noted that the occupation media forgot to mention that this year, two vyshyvanka parades were held there. One was initiated by the mayor's office, and the second one was informally organized by local activists.

The proof of the authenticity of both events is the intrigue of their announcement and coordination, which was reflected both in local media and on the official website of the Mariupol City Council.

It became clear that the administration intended to hold the parade without blocking traffic on the central streets, and therefore scheduled it for working hours in the City Garden. Representatives of the local activists informed the administration that they would hold their parade on the traditional route after the end of the working day.

Thus, there were twice as many photographs of the vyshyvanka-styled Mariupol as usual in the information space, which made the propagandists particularly furious.

“Have you forgotten? The Mariupol residents were all killed in 2014 by AFU and now we, actors of the Ternopil and Ivano-Frankivsk theatres, live here”; “That's Photoshopped, in fact, that parade was held in a village in Poltava oblast #youarelying :)"; “Today I learned that we were outraged by that parade to the point we held two of them in one day. It’s because the imposters from Canada did not have time to get off the boat in time”, - the local participants of the vyshyvanka parade mock the propagandists of the occupied part of the Donetsk oblast. 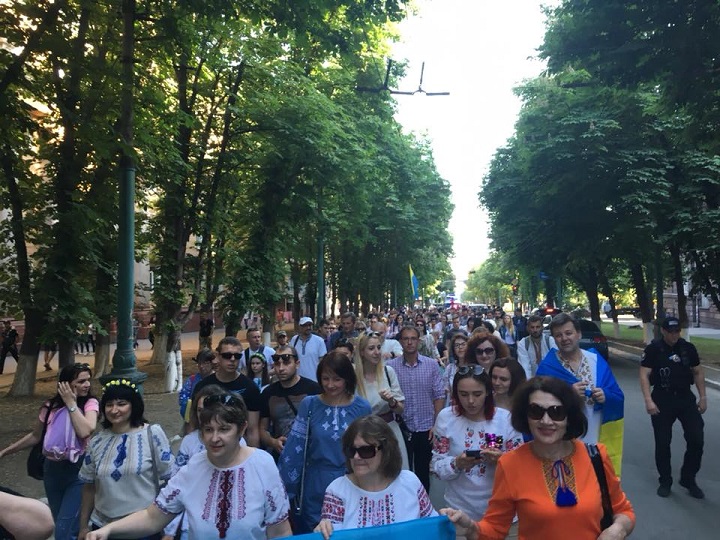