The SBU has decided to impose a three-year entry ban on Russian singer Yulia Samoilova, who has been selected to participate in the 2017 Eurovision Song Contest, the SBU spokesperson Olena Hitlianska wrote in Facebook.

"The Security Service of Ukraine has imposed a three-year entry ban on a Russian citizen Yulia Samoilova", - she wrote.

According to her, the decision was made on the basis of the received data on the violation of the legislation of Ukraine. 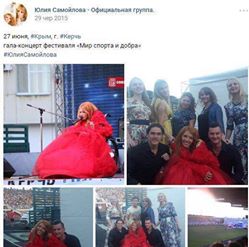 As previously reported, Russian singer Yulia Samoilova has been selected to participate in the 2017 Eurovision Song Contest with the song Flame Is Burning. She has been in a wheelchair since childhood. The SBU reported that it will check the reliability of information about possible visits of Samoilova to the Crimea, and after that it will decide on her admission to Ukrainian territory.

On March 20, the SBU spokesperson Olena Hitlianska said the decision had not yet been made. It is worth noting that Russian media earlier reported that the SBU had already granted Samoilova a permission to enter Ukraine to participate in Eurovision 2017. However, Samoilova violated Ukrainian law in 2015 when she performed in the occupied Crimea.