Economy of the Russian world in CADLO: Lies and desolation

Exodus of residents from the districts of Donbas captured by the "DNR"-"LNR" is a direct consequence of the colonial economic policy of the Kremlin in these territories.

In this context, the President of the Russian Federation demonstrates particular cynicism by signing on November 15 decree No.657 on simplifying the admission of goods from CADLO to the Russian government procurement system, which for some reason is interpreted as "admission to the Russian market". In fact, the decree clearly states: "in order to carry out purchases of goods to meet state and municipal needs and purchases of goods by certain types of legal entities". That is, it is far from an open market.

But in turn, the puppet leadership of the "DNR"-"LNR" shows elation over this decision and enthusiastically makes some "plans for economic development".

I do not even want to laugh at the numbers put there, it is so sad.

Hardly anyone who enthusiastically greeted the "liberators" with St. George's ribbons on the streets of Donetsk and Luhansk in May thought that everything would end this way.

"Optimism" is off the charts

Presidential Decree No.657 contains an instruction to the Russian government not to apply import quotas for goods from the "DNR"-"LNR" ("except for certain types of goods"). In exactly the same way, quotas should not be taken into account when supplying Russian products to these regions.

In addition, it is required to recognize the certificates of origin for goods produced in CADLO during customs clearance. These measures are touted as "humanitarian support".

The Yuzhny Mining and Processing Plant (YuMPP) of Yevgeniy Yurchenko, who replaced notorious Vneshtorgservis (VTS) as the curator of industry in CADLO, hastened to state on this occasion that "the decree quite accurately removes and eliminates the main barriers that previously blocked the full-fledged admission of goods from the Donbas to the Russian Federation".

"Specifically for our enterprises, this opens a green light to the Russian market for iron and steel industry products", - the company added.

The main news here is that it turns out that earlier, a "red light" was on for the CADLO factories before entering the Russian market.

But seriously, what barriers and admissions can we talk about, if the same iron ore from Russia arrives at the CADLO metallurgical plants without any customs clearance at all?

Metal from the uncontrolled areas enters Russian territory in the same way, according to "black" schemes, without official registration.

Customs duties, commodity quotas and certificates of conformity – these are all attributes of legal international trade transactions.

If Vneshtorgservis paid in cash for the supply of coal and steel without any accompanying documents, then from the point of view of financial monitoring, this is no different from the operations with cocaine of some Mexican drug cartel. And there is no reason to think that something has changed with the arrival of the YuMPP.

Another indicator that indicates stagy nature of the decree of the President of the Russian Federation and the YuMPP commentary is the production volumes at the CADLO enterprises.

As much as 10 thousand tons of thick plates were rolled at the Alchevsk Iron and Steel Works (AISW) in November. The "bold" plans of the YuMPP are to reach a monthly volume of 50 thousand tons. 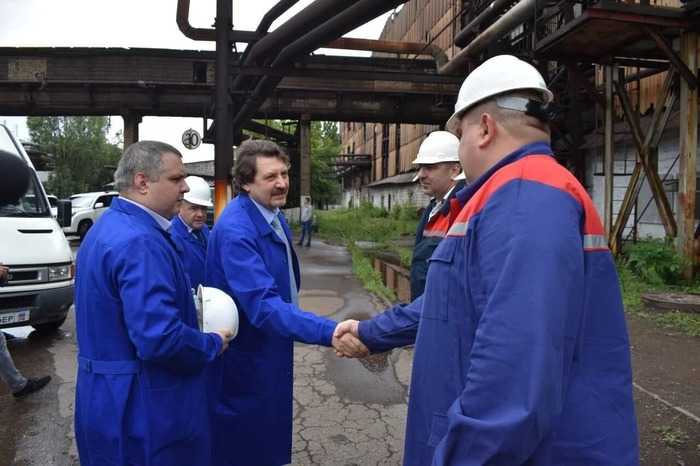 Ye.Yurchenko (second from the left) came to the Alchevsk Iron and Steel Works in June this year

For understanding: the AISW produced 367 thousand tons of rolled products in November 2013, the average monthly rolling volume in the not-so-successful 2012 was 289 thousand tons.

That is, even if the YuMPP manages to fulfill the assigned tasks, production at the enterprise will be 6(!) times less than the pre-war level.

Did anyone in Russia apply quotas for such a negligible amount of rolled metal?

Meanwhile, the propaganda Russian media presented the message about the production "achievements" of Yurchenko's company at the AISW with mocking optimism: "Russia has revived the largest metallurgical plant in the Donbas".

Well, how to say – if the planned, but not yet taken place, reaching the level of utilization of rolling capacities of 15% of the pre-war level means "revived", then yes.

Although in fact, it did not revive, but killed. And not only the AISW, but the entire industry of Donbas.

Business publications of the Russian Federation, unfortunately, do not lag behind the propaganda ones. One of them, referring to an "expert", issued a message that the AISW now, after the resumption of work and the release of the above-mentioned decree of V.Putin, may occupy up to 15% of the Russian flat rolled stock market.

If such a message came out on April 1, then there would be no questions for the publication at all. But Fools' Day is still a long way off. And Russian media are already trying to make fools of its readers.

Meanwhile, you can easily find information in open sources that the release of flat products in the Russian Federation at the end of 2020 amounted to 13.6 million tons.

This means that with the planned production of 50 thousand tons a month, the share of the AISW will be 4.4% – taking into account further partial re-export outside the Russian Federation.

At the same time, some Russian experts admit in their comments on this matter that "the steel market in Russia is excessive" (that is, no one needs the AISW rolled products there). And "the quality of the AISW's products raises questions, given the underfunding during several years" (meaning that the equipment repairs at the plant under VTS were not carried out at all).

Therefore, "the topic of deliveries from the AISW to Russia is seen to be completely politicized" (that is, it is intensively accelerated by the propaganda machine for political purposes with zero economic effect).

The colleagues in CADLO are not lagging behind the propaganda Russian media. They report with the same clinking optimism that the Donetsk railway loaded more than 1 million tons of cargo over 1 month in November – for the first time in the last three years.

Yes, the growth in freight traffic is indicative of economic growth. However, the separatist media modestly kept silent about the fact that in November 2011, for example, the figure was 13.1 million tons.

Even taking into account the fact that the then data were taken into account for the entire Donetsk and Luhansk oblasts, and not only for CADLO, – the depth of the fall is more than impressive.

But the puppet leadership of the "DNR"-"LNR" pretends not to notice this.

Who wants a job?

It assumes an increase in gross domestic product and exports by 70% compared to 2020 and average salary in the economy – by 2.3 times – incl. in metallurgy and coal industry.

Of course, the minister did not specify that in 2020, there was a sharp decline in economic activity around the world due to the coronavirus epidemic.

Therefore, no growth is planned in fact, the current "authorities" in Donetsk simply hope to return to the pre-coronavirus level in 2-3 years.

As for the expected increase in wages, you need to understand that now it is at bargain-basement levels. And a twofold increase will change nothing.

For example, the average salary in the agricultural sector in the "DNR" at the end of September was $258. Russian agricultural workers in September received an average of $483 and Ukrainian – $528.

That is, by 2025, the wage of agricultural workers in CADLO will reach the level that in Russia and Ukraine was 3-4 years ago. The picture is the same in other industries, including coal mining and metallurgy.

That is why there is no one to work at the survived enterprises in CADLO – the people have left to work. And who could – for permanent place of residence.

According to the "DNR Ministry of Economic Development ", local employment centers received over 51 thousand applications from employers in January-October.

There were 31.1 thousand people registered in the centers. That is, there were almost 2 vacancies for each applicant. But there are few of those who want to work for the money offered, or rather, for food.

3.2 thousand people got a permanent job through employment centers in October, of which only 22.7% were young people. This is about 700 people.

The example of the Shchehlovska-Hlyboka mine (part of the Donbas mine management) is indicative in this respect.

According to the separatist media reports, it employs 736 people now. The number of staff is 1.5 thousand people. That is, the shortage of staff is slightly more than half.

Trying to fix up the situation, the management of the mine posted a voice announcement about recruiting employees in supermarkets throughout the "DNR" for 2 months. As a result, as many as 100 people got a job at the mine in October-November.

At the same time, the management of Shchehlovska-Hlyboka announced plans to increase daily production in 2022 to 1700 tons, compared to the current 600 tons.

Although it is clear that with such a critical shortage of workers, even just keeping the existing volumes is very problematic.

This is also true for iron and steel works. So, 1511 people were worked at the Makiivka Iron and Steel Works (MISW) in October.

This includes those 127 people who were employed at the MISW in June-October. The plant employed 7 thousand people before the war. Therefore, the production volumes are relevant.

The design capacity of rolling mill 170 at the MISW is 75 thousand tons of wire a month. 19 thousand tons were received there in October. The mill has generally been idle since March.

Nevertheless, the current management of the MISW shares plans in the comments to the separatist media to return its rolling mill operators who left for Russia.

Theoretically, this is possible – by offering them a salary 2 times higher than the Russian one. But this is not feasible in practice.

This is one of the main reasons why "simplifying the access of goods from the DNR-LNR to the Russian market" does nothing for the remnants of the CADLO economy. There is simply no one to produce these goods.