The replacement of the industry curator in CADLO brought no improvement. This is evidenced by the September strikes and the deaths of miners in local mines. However, nothing else was expected.

The "burying" party of Vneshtorgservis CJSC (VTS) of fugitive Kharkiv oligarch S.Kurchenko mercilessly ruled at the seized Ukrainian enterprises for too long.

Therefore, the entrance of Russian manager Ye.Yurchenko and his Financial Assets SC company upon manager's duties, in fact, gave nothing.

The victorious news about the repayment of many months of wage arrears at mines and metallurgical plants appeared in separatist media just a couple of days after reports on social networks about yet another strikes in Donetsk.

Therefore, they can only be considered as an exhaust aimed at drowning out information about the actual state of things.

The accident at the Chervony Partyzan mine (Chervonopartyzansk, Luhansk oblast) on September 6 might not have happened. It was caused by the worn-out cable breakage of the mine cage, according to the "Ministry of Emergency Situations of the LNR".

Under normal conditions, pulling equipment at mines is inspected on a regular basis. If the tear-and-wear has exceeded the allowed values – a replacement is made. Because people's lives depend on it.

It is difficult to say whether the management of Chervony Partyzan knew about the breakdown rate of the cage cable. However, this does not change much. Since under VTS, coal miners were not paid for the shipped products for months.

If there is no money at the mine even for the salaries of workers – for what means should we buy replacement components and which contractor will agree to carry out repair work on credit (read: for free)? As a result, 9 people died in the mine shaft.

The catastrophic state of the mining equipment in CADLO is confirmed by the incident that occurred at the Yasynivska-Hlyboka mine (Makiivka, Donetsk oblast) the next day, September 7.

A worker was killed there by the rock in the mining face. Obviously, the barring has long been waiting for replacement – but it was not possible to do this in the conditions of permanent lack of money under VTS.

Industrial safety was an empty phrase for the representatives of S.Kurchenko, they were given a different task: to "pump" more money out from the mines. Here and now.

This approach is being paid by the miners' lives – accidents at mines in CADLO occur regularly.

For example, there was an absolutely similar incident in the same Yasynivska-Hlyboka mine in November 2017: two people died due to the collapse of the overlap in the mining face. 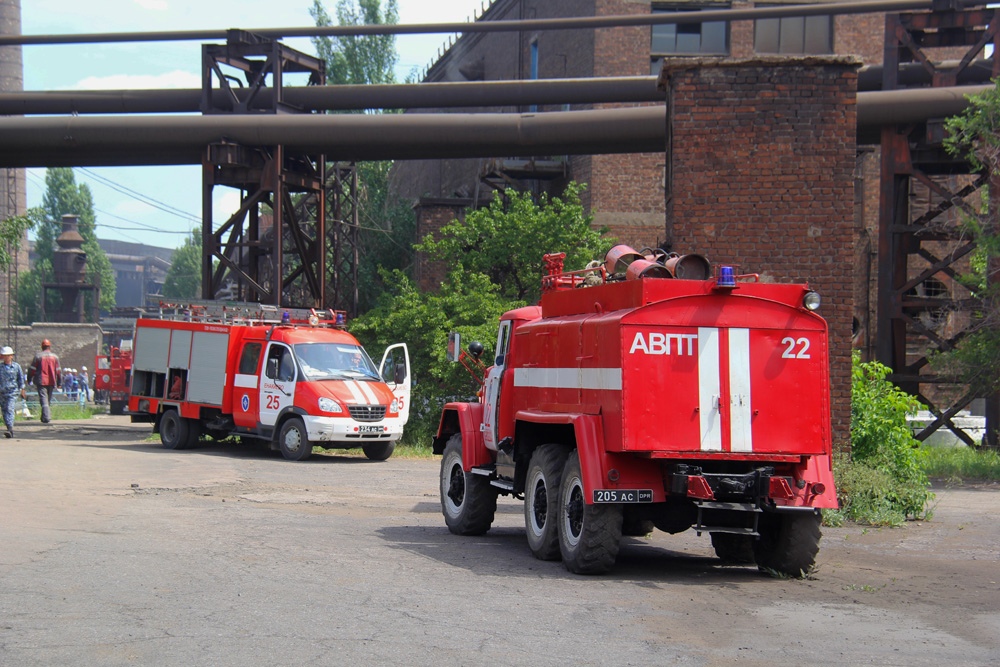 But if the July 2020 fire at the Yenakiieve Iron and Steel Works turned out to be not very large-scale (a one-story cooling tower burned in the water supply shop, the fire destroyed 60 m2 of sandwich panels and 2 m2 of plastic mesh under the sprinklers), then the April 2017 fire in the converter shop of the Yenakiieve Iron and Steel Works completely stopped the work of the enterprise for several months. The main equipment, including the control panel, suffered from the fire.

Another fire at the metal plant in CADLO occurred on September 6. The oxygen shop of the Donetsk Metallurgical Plant was on fire on that day. No cause of fire was reported.

Nevertheless, this once again shows the industrial safety state in the few enterprises that are still "breathing" on the other side of the contact line.

People have to work there literally risking their life. And mere pittances like $7 to the Day of Metallurgist do not cover these risks in any way.

The last resource of Donbas

Ye.Yurchenko replaced S.Kurchenko as the manager of the grabbed enterprises in June of this year. At that time, the total debt of VTS to mines and factories exceeded $798 million.

According to the separatist media reports, over $48 million were paid out in early September for 9 enterprises. That is, only a small part of the debts has been closed.

At the same time, it is worth paying attention to the strike of staff of the Ikarus Donetsk Auto-Transport Enterprise in early September. This enterprise transports workers of the Zasyadko mine, which also stopped in this way.

According to the media sources, the salary debt in the ATE reached 4 months at the mine, but Ye.Yurchenko's company refused to pay it off – having stated that it did not recognize the VTS debts.

That is, the Kremlin and puppet leadership of the "LNR"-"DNR" are in fact trying to "forgive" multimillion-dollar obligations in CADLO by appointing a new manager.

Therefore, there are big doubts about the reality of plans to increase production at the same Yenakiieve Iron and Steel Works and recruit 1.5 thousand people before the end of this year.

These plans were announced in July by the factory administration. At the same time, even according to official data, almost half of the staff – more than 1 800 people have left the enterprise over the past year and a half.

This state of affairs fully fits into the framework of the neocolonial policy that the Kremlin is pursuing in regard to CADLO.

As OstroV previously noted, coal industry in the occupied territories of the Ukrainian Donbas has no prospects in relation to the Russian economy.

Since even now coal production in the Russian Federation is twice as large as domestic needs. Export sales will fall due to the widespread refusal of developed countries to use coal in energy and metallurgy.

The Donbas steel is also of no value to Russia, which rose to 4th place in the world in terms of steel manufacture by the end of 2020.

In this regard, the only value for the Russian Federation in the "DNR"-"LNR" is human capital. Hence the Russian MIA proposes to include the residents of CADLO in the state program for the resettlement of compatriots.

According to the September publications in Russian media, the MIA is preparing the relevant proposals in the form of a draft presidential decree.

Participation in the program will give a person the right to get guaranteed housing, work and "relocation allowance". But there is a need to move to certain depressed regions.

That is, future Donetsk and Luhansk migrants will have to live in "abandoned houses" in the Far East and Siberia. They are not expected in Moscow and the central region.

As it is known, the first wave of resettlement from CADLO to depressed Russian regions took place in 2014-2015 against the background of active hostilities.

Since there are no full-scale battles now, it is necessary to use other tools that stimulate the departure from the occupied territories.

Employees can tell about the real situation in the captured enterprises only in social networks.

Conditions impossible not just for a decent life – but for elementary survival – are being deliberately created.

But, of course, turning CADLO into a completely depopulated desert is also impossible – the subject for the foreign policy bargaining on the future fate of the region is lost in this case.

Therefore, there will be no complete cessation of subsidies from the Kremlin. And in order to somehow reduce them, it is necessary to continue creating the visibility of the work of local enterprises.

As it is done at the same Yenakiieve Iron and Steel Works, where a demonstration melting of pig iron was carried out in front of the propaganda media at the beginning of September, for the first time in six months.