The basis of "economics". Turkish adventures of Donetsk scrap

The war turned the territory of Donetsk and Luhansk oblasts, which is not under the control of the official Ukrainian authorities, into a real "klondike" for illegal procurement of scrap metal.

After the stop of the few still "breathing" industrial enterprises in CADLO (it seems, now finally) in the second half of 2020, the role of scrap procurement and tobacco smuggling in the "economy" of the "republics" increased. They have become the main industries for pumping money out of the region: dozens of scrap collection points are officially operating in Makiivka alone. That is without taking the completely back-street "points" into account.

Therefore, the "authorities" of CADLO tried to "grab" this business from the criminal elements as much as possible, contrary to the previously concluded informal agreements.

But most of the scrap collection is still in the "shadow" and is controlled by all kinds of "big dogs". One of them is, in particular, "Minister of Internal Affairs" of the DNR, Alexey Dikiy. At least it is with him that the recent incident with the FSB officers who came to investigate the disappearance of the Russian Railways cars in Donetsk is associated.

The last attempt to revive metal melting in Donetsk was made in the second half of last year. For this purpose, either scrap metal or burden materials (a mixture of materials for metal smelting - ed.) was brought to the territory of the Donetsk Metallurgical Plant (DMP). But the carriages did not come back. A commission of special services arrived from Russia at the end of the year to investigate their disappearance. When the inspectors got to the most interesting thing, suddenly, the entire composition of the commission is being blocked by cars with silent armed men on the road on a dark evening. They put sacks on the heads of Russian special services' employees, transfer them to other cars and take them out of town. There they are offered to choose: either they quietly leave Donetsk tomorrow, or they can dig their own graves right under the starry Donetsk sky already now. At the same time, they are expropriated of all the documents that they managed to "dig up" at the DMP.

Naturally, Russians had already crossed the border of their vast homeland the next day. Without Russian Railways cars and evidence of the existence of a "black hole" in Donetsk.

Given the arrogance and "recklessness" of this operation, it is attributed to Arsen Avakov's protege, "DNR Interior Minister" Alexey Dikiy, who is directly subordinated to the security forces in Moscow. It is not yet clear whether this story will continue, but it eloquently illustrates the "civilization" of the "state" scrap metal market in the "republics".

Disabled military equipment was the main resource for scrap collection some time ago. Back in 2014, this "business" was "mastered" by various "LNR"-"DNR" warlords.

For example, tanks, armored personnel carriers, guns, etc. that could not be restored have been cut at the Snizhne chemical engineering plant since September 2014.

This source of scrap has actually been exhausted over the past 5 years after the end of active phase of the hostilities. More traditional and long-lasting sources remained: household and industrial scrap.

The first one is stolen manholes, cut graveyard fences, gates, cast iron radiators and baths from the abandoned apartments and houses.

One of these "procurement specialists" was captured by a streamer in Makiivka in mid-December 2020:

The second source of scrap is the constructions of non-operating enterprises and mines, including rail access road.

The field of activity here is even wider: given that the Donbas was one of the most industrial regions of the USSR. Even 23 years after its collapse, the Donetsk oblast in independent Ukraine was the leader in terms of industrial production.

According to local residents, the scrap received is exported to Russia. Obviously, after "legalization", it partially goes to the nearest electrometallurgical enterprises. These are Tagmet (Taganrog, Rostov oblast), Rostov Electrometallurgical Plant (EMP) and Abinsk EMP (Krasnodar Krai, both enterprises belong to the same owner) and Frolovo EMP (Volgograd oblast).

The rest of the scrap is exported to Turkey, which is a large consumer of official Ukrainian and Russian steel scrap. Along with the coal smuggled from the "DNR"-"LNR".

The profit of the owners of scrap collection, as well as of their backings in the criminal world and law enforcement agencies, is based on the tremendous difference in the price of scrap within CADLO, in Russia and in Turkey.

For example, the Yug Plastic company buys it at $207-210/t depending on the batch volume, the complexity of loading and transportation costs.

The most expensive purchase among the monitored traders was from LLC Yugmet – $236/t, while it was only $122/t – from Donetskvtorresursy. These figures are relevant for Donetsk. It is easier on the fringes.

For example, scrap in Makiivka is taken at $107/t. Scrap in Luhansk costs about the same ($109/t), such proposals can be found in Donetsk as well.

Prices in Russia are of a different order.

The aforementioned Yugmet pays $248/t for steel scrap in the nearby town of Shakhty (Rostov oblast). OOO Rostov-lom in Rostov – $259/t. Operators in Novorossiysk take scrap at $259-267/t. Already in Turkey, local EMPs buy it twice as expensive. In December, the cost of black scrap metal on terms of delivery to Turkish ports was in the range of $430-470/t.

So, having bought scrap in CADLO at $100/t, it can be sold in Turkey for at least $400/t, that is, four times (!) more expensive. It is not surprising that the popularity of this business in the uncontrolled territories is comparable only to tobacco smuggling.

But the main sales market for it is the EU, so supplies go mainly through Ukraine. And scrap is sent to Turkey mainly through the Russian ports of Rostov, Novorossiysk and Taganrog.

Nevertheless, cases of importation into Ukrainian territory are also recorded from time to time. So, last winter, security officials detained a loaded KAMAZ, which was heading for Mariupol. 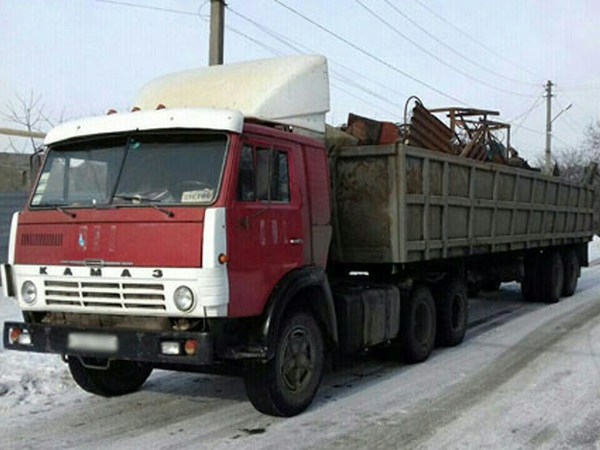 Detained KamAZ with scrap at a checkpoint near Mariupol

On the instructions of the owner, its driver collected 15 tons of scrap from rural "points" near Kurakhove.

Perhaps the final point of his route was the metallurgical plants named after Ilyich and Azovstal. But rather, they tried to smuggle this scrap to Turkey through the Mariupol port.

Hercules gets into the game

There were 10 licensed scrap stockists in the "DNR" in November 2016. It was easier with this in the "LNR": 132 scrap collectors officially worked there in October 2017.

But the situation changed already in the summer of 2019. Official scrap collection was centralized in both "republics".

The right to take scrap in the "LNR" was left only for LLC Lugamash and the "state-owned" enterprise Vostochny Energo-Alliance Trading House.

A year later, in April 2020, a certain Potential joint venture became the main scrap collector instead of the Vostochny Energo-Alliance.

Lugamash, created in 2016 on the basis of one of the repair shops of the Luganskteplovoz association, "killed" by the Russians, retained the right to independently collect scrap.

It follows from this that the Kremlin curators forced the Luhansk ruling circles to "move" in the legal scrap market.

Otherwise, why would they give such a fat piece of the pie to some joint venture (which implies the equity participation of some external Russian partners) instead of their own "republican" structure.

At the same time, Lugamash is allowed to sell the collected scrap only within the "LNR", and Potential can export it.

Vostochny Energo-Alliance did not have such a right: it was also allowed to sell the collected scrap only for internal use.

The main consumer was the Alchevsk Iron and & Works (AISW), which stopped at the beginning of November 2020 once again.

The official scrap market in the "DNR" is much larger in volume, therefore it is quite tightly regulated. Since February 2019, private procurers are obliged to hand over all scrap to the "government" institution Vtormet Trading House Republican Center.

Moreover, to hand it over at a fixed price set by the self-proclaimed "government" of the "republic." In turn, Vtormet should sell scrap to "state-owned enterprises" at a fixed price as well.

The export of scrap from the "DNR" was actually banned in July 2020, allowing its export within the nominal annual quota of 2 thousand tons.

All the rest of the officially collected scrap must be sold to local metallurgical enterprises, or to the "LNR" for the needs of AISW. The local ones include the Yenakiieve and Donetsk Metallurgical Plants, as well as the Donetsk Electrometallurgical Plant (DEMP).

At the same time, Yenakiieve and Donetsk Metallurgical Plants are idle most of the time due to the months-long wage arrears and a lack of iron ore – also caused by non-payments for previous supplies from the now former manager, Vneshtorgservis (VTS).

In 2017-2020, these enterprises, seized from the Ukrainian oligarchs in 2017, were transferred to the VTS management of fugitive Kharkiv oligarch Serhiy Kurchenko with the assistance of the Kremlin curators. Who did not pay either for gas or for electricity on the assets entrusted – having accumulated months-long wage arrears. VTS also owed a large sum to Russian suppliers of iron ore.

At the same time, preventive repairs have never been carried out at the enterprises during the entire period of the VTS "management" – which is fraught with serious accidents, as the workers of the plants themselves claim.

According to separatist media, the listed plants have now been returned to the "republican" management, but the situation is deplorable. Therefore, only the DEMP really needs scrap.

The Donetsk Electrometallurgical Plant had been idle for years long before the war, and at the time of the seizure of power in CADLO by the separatists, it did not work either. This saved him from the transfer to VTS.

In 2016, the enterprise, renamed the Yuzovsky Metallurgical Plant, was unsuccessfully tried to launch by the then leader of the "DNR" Alexander Zakharchenko.

According to the Donetsk sources close to the separatist leadership, it was possible to "scrape up" scrap (the DEMP uses not iron ore as raw materials, but steel scrap) under A.Zakharchenko on a loan of one melt.

The equipment was launched with great fanfare in the presence of A.Zakharchenko. But his  accomplices "forgot" to pay off with scrap suppliers, so there was no raw materials for the second melting and the plant froze again.

A new attempt to bring the DEMP back to life began only in October 2020. According to separatist media, Donetsk businessman Igor Andreev, known in Ukraine as the owner of the Hercules trademark, took over its resuscitation.

He also owns the Kurakhove Electrostal Plant and the Donetsk Metal Rolling Plant (DMRP). Elektrostal also works on scrap, so I.Andreev has established its collection since the pre-war times.

Now the "DNR" is pinning hopes on it for a sustainable resumption of the DEMP operation. The steel produced there can then be sent for rolling to the DMRP – since deliveries from Elektrostal, located on the other side of the contact line, are now impossible.

However, the volume of work of the DEMP is insignificant: for example, only 10 tons of steel were melted there in October 2020. If you work with such a load for a year, you will get 120 thousand tons – or 9% of the DEMP designed capacity.

Nevertheless, the structures of I.Andreev are unlikely to be able to collect more legal scrap under the conditions of the "DNR": the main blank continues to remain under a dense criminal "protection". For which the export of scrap from the Donbas to Turkey is certainly more interesting than the "charitable" sale to the DEMP at a fixed price.